What the US election means for Investors

Democrat Joe Biden is pressing ahead with preparations to take the reins as the next President of the United States. Despite legal challenges and recounts, the early signs are that markets are responding positively.

In fact, the US sharemarket hit record highs in the weeks following the November 3 election as Biden’s lead widened.

The state of play

As things stand, Joe Biden has 306 electoral college votes, comfortably ahead of the 270 he needs to win. He also leads the popular vote. With 99 per cent of votes counted, Biden has 80.1 million votes to Donald Trump’s 73.9 million.i

As well as voting for President, Americans also voted for the US Senate. While Democrats will control the House, it appears likely that Republicans will retain control of the Senate if they win at least one of the two Senate seats up for grabs in Georgia in January as expected.

The upshot is that come inauguration day on January 20, the US will most likely have a Democratic President and House with a Republican Senate which would act as a check on Biden’s more contentious policies.

So what can we expect from a Biden Presidency?

The policies Joe Biden took to the election which stand to have the biggest impact on the US economy and global investment markets include the following:

While a Republican Senate may oppose measures such as higher corporate taxes and tougher regulation of industry, it is expected to be more open to some of Biden’s other policy initiatives.

The outlook for markets

The general view is that further stimulus spending should support the ongoing US economic recovery which will in turn be positive for financial markets.

While Biden is committed to heeding expert advice in his handling of the coronavirus, a return to lockdown in major cities may put a short-term brake on growth.

Longer-term though, recent announcements by pharmaceutical company Pfizer and others have raised hopes that vaccines to prevent COVID-19 may not be far off. This would provide an economic shot in the arm and continued support for global markets.

However, as sharemarkets tend to be forward looking, the US market appears to have already given Biden an early thumbs up with the S&P500 Index hitting record highs in mid-November.

While the past is no guide to the future, it does suggest the market is not averse to a Democratic president.

What’s more, shares have done best during periods when there was a Democrat president and Republican control of the House, the Senate or both with an average annual return of 16.4 per cent.ii 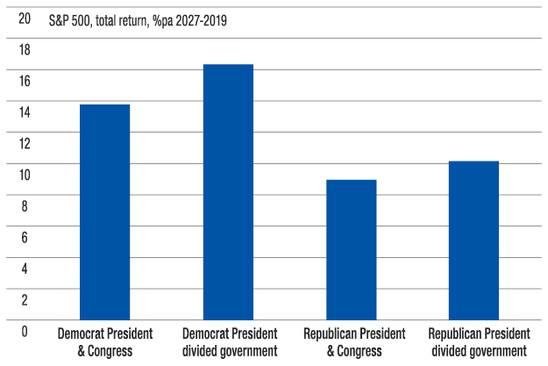 Any reduction in trade tensions with China would be positive for our exporters and Australian shares. While a faster US transition to cleaner energy might put pressure on the Morrison government and local companies that do business in the US to do the same, it could also create investment opportunities for Australia’s renewables sector.

Ultimately, what’s good for the US economy is good for Australia and global markets.

If you would like to discuss your overall investment strategy as we head towards a new year and new opportunities, don’t hesitate to contact us.

ELEMENTS OF A COMPREHENSIVE FINANCIAL PLAN